If you are an indie dev, you understand the struggle of sticking to one project. For the past few months I've been juggling two projects, one you know is my VR game Sundown Arcadia, but the second is a multiplayer PC game in the vein of Smash Bros, Rayman, and Waking Mars. It is a 4 Player platformer battle arena based on an alien planet in space, where players choose to play cooperatively or competitively...each level has to be "won" by destroying the alien generator at the top, but players can kill each other and you can either win together as a team, or you can kill your team and win alone.

Right now we have the basic character and movement (floaty jumps with a jet pack), a simple obstacle (alien plant trap), the ability to shoot teammates, multiplayer controller input, and the win condition. It's exciting to see it coming into a playable form! This is the largest team I've formed for one of my projects, we have a character artist, environment artist, two programmers, and a sound designer. Gameplay videos coming soon!

Awarded "Most Innovative" for Sundown Arcadia

A few weeks ago I named my project Sundown Arcadia and began working on it a bit more seriously. Since then I've begun presenting it and talking about it publicly at every opportunity, starting with taking it to local game dev events and getting playtesters, then submitting it to the Launch Pad Diversity Scholarship, and finally pitching it at the Intel Game Dev Showcase at the Austin Game Conference where it was awarded "Most Innovative" by the judges.

I've also had a couple of opportunities to speak to other VR developers about the direction I am going with it. At PAX West I moderated a panel titled "The Reality of Virtual Reality" which drew a great crowd of VR enthusiasts and developers, and I had a chance to talk to some of them after the panel to get input. 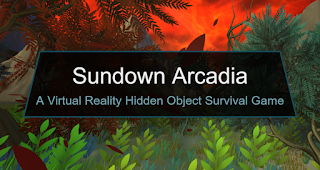 What I'm really trying to do with Sundown Arcadia is make something that is a fairly unique experience and takes advantage of what the hardware has to offer. In that spirit, the game is entirely gaze-based - the player stares at what she wants to do as her primary (and only) form of interacting with the world. This does a couple of interesting things. 1. VR developers often squabble over the best approaches to using the player's hands in the game - what controllers to use (mouse, gamepad, motion-controller), how to represent the player's hands in the game, and how the player uses their hands to interact...my solution is to not use hands at all. 2. Using your eyes to alter the world is a form of fantasy-fulfillment - many people, especially kids, long for mind-control: stare at something to make it explode, focus on an object to move it through the air, alter or combine objects through the power of will.

Winning the award for "most Innovative" was a great honor, but it was also the validation I need to show that the direction I am taking this really is unique and interesting and something people would like to have in a full game experience (currently it exists in a brief 2-3 minute proof-of-concept prototype).

Currently I am working on bringing Sundown Arcadia to the next stage of development: I'm working to bring in a few team members (programmer, designer, sound designer, artist), and I'm taking that proof-of-concept and fleshing out the gameplay elements (adding enemies, obstacles, challenges, tools, and additional mechanics).
Posted by MJ at 6:42 PM No comments: