This is Part 2 of a 5 part series on my latest course on Pluralsight: Prototyping Game Systems. If you missed Part 1 be sure to start there!

In part 1 we covered the design-prototype relationship, how to assess design needs, and we discussed game mechanics and systems. Next we need a playable space to prototype in. When prototyping in an existing game, it's generally best to make a "safe" scene for prototyping the new mechanics, to avoid causing issues that might break the main playable scene. This is especially important if multiple developers are working on the project simultaneously.

In this course we are using Unity to develop the game, and Unity has an excellent built-in prototyping tool called Pro Builder.

Pro Builder allows you to create and manipulate 3D shapes in the Unity editor, without needing an external 3D modeling tool.

With the help of Pro Builder, you can easily shape out a playable space in just a matter of minutes. The manipulator tool allows you to adjust faces, edges, and vertices.

You can also extrude and bevel to make interesting shapes and crevices. 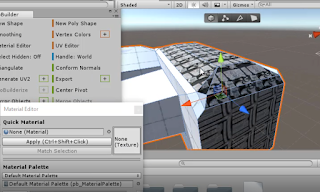 And when you are satisfied with your shape, you can apply textures, either to the entire shape or to individual faces. Pro Builder even has a simple UV editor to give you more precision for the texture.

For this course I've created a large open space with stairs and an arch, so the walkable ground has various heights and there is an area to walk under where the character won't be visible.

Next we drop in our character model and add a nav mesh. This game is in 3rd person, and the character controller has already been built for us and uses the nav mesh to move around.

The way the nav mesh works is it collects information about any surfaces that are marked "Static" and generates a "walkable" area, shown with a blue overlay. This nav mesh tells the character where it can walk via a Nav Mesh Agent component, which is attached to the character controller. 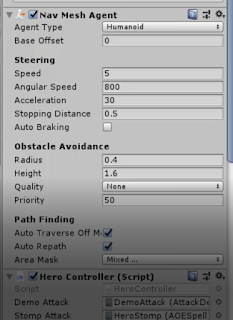 Now we have a playable space set up for our character to run around that doesn't interfere with the main scenes of the game, so we are all ready to start prototyping the new mechanics.

In part 3 we will build new mechanics for the game, including digging, looting, and powerups. Thanks for reading, and if you enjoyed this please check out the full course on Pluralsight: Prototyping Game Systems for Swords and Shovels.