I'm going to do something a little bit different today. In a couple of weeks I'll be going to Unite LA (the big Unity3D conference) as a speaker, and my talk is on Interface Design for Mobile and VR (and other unusual platforms). I've been trying to work on my talk, but I keep finding myself with writer's block, and I think I find it easier to blog that to assemble a presentation, so I'm going to jot down my ideas here. Feedback is welcome :)

I'd like to start off with an overview of unusual hardware, and specifically give some examples of how I've designed for some of them. Then I will move on to talking specifically about designing interfaces.

In no particular order, here is a list of all of the variety of hardware I can think of (and I have developed on each of them): Mouse, keyboard, gamepad, motion-tracking controller, head-tracking, touch-screen, Kinect, Wii balance board, heartrate, 3D stylus (zSpace), 360 treadmill, Leap Motion. You may notice that some of these are a type of hardware, whereas others are a specific brand. That is because I am lazy, and also some types of input are recognized more for one brand than for the type of input. Think of it like saying "Kleenex" instead of "facial tissue". People know what you mean.

Mouse, keyboard, and gamepad are probably the most common input people think of when they think of game development, so I am not going to talk about those. As I talk about each of the other types of hardware, I want to emphasize that my intention with design is to answer this question: "What is unique about this hardware that no other hardware can do?"

Let's start with the zSpace, the one you are most likely to have never heard of. 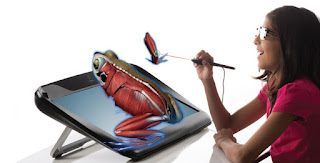 The zSpace is a semiholographic display tablet with a 3D stylus, and special glasses that has markers on them to allow the display to be projected toward you, giving a full 3D effect. Without actually using one, it can be very hard to imagine, so you will just have to trust me that when you use it everything you see looks completely real. Not "real" in the sense that it is photorealistic, somethings are very stylized, but real in the sense that you believe you could reach out and pick it up, like a toy.

When I was first presented with this device I had a team of artists and programmers working with me, and the only direction we were given is "this device is used for tools, education, training, and medical applications, see if you can use it to make a game." And so we set out. We began by orienting ourselves to the hardware, using the existing apps, then building some prototypes. We were looking for "fun" in the interactions, but we were also looking at what made it really unique, and very quickly we discovered both in the form of "drawing" 3D shapes using the 3D stylus. In particular, drawing spheres was very satisfying and enjoyable. So how can you make a game about drawing spheres? In parallel with our experiments, we had also been brainstorming game concepts, and had mostly sittled around the idea of having floating islands (to make full use of the 3D effect) that had bunnies on them, and the bunnies were being hunted by foxes. So as the player, your goal was to keep the bunnies safe. We tied this to our sphere-drawing mechanic by having the player draw bubbles around the bunnies to make them float up out of harm's way, and they would float over fenced in safe-zones where foxes couldn't reach them (there was also a small random chance of the bubbles blowing away in a wind gust, to add anticipation). In addition to bubble drawing, the player could also use the stylus to pick up items - a carrot to lure the bunnies, a stick to pop bubbles, and a fan to move bubbles around. In the end it was pretty enjoyable, but there was one thing missing...how to represent the stylus in the 3D world in a meaningful way? That answer came from one of our artists, who decided to make a pair of chopsticks. It did the trick of trying all of our interactions together. See it in action here.

Next up: 360 Treadmill. This is in essence a treadmill where you can walk in any direction while staying in place. 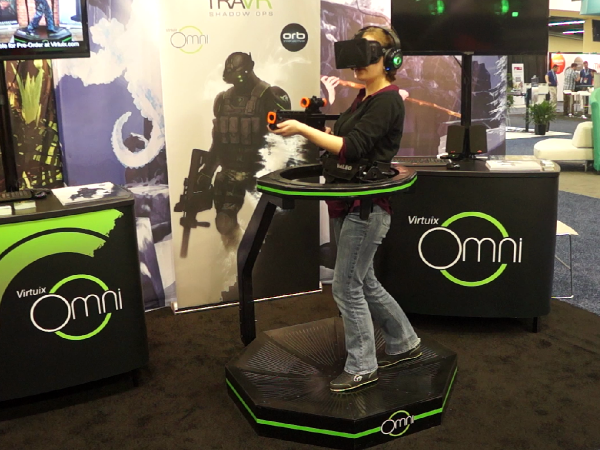 A couple of years ago I worked as a developer for Virtuix Omni, one of the first of such devices. What makes this hardware unique is pretty obvious, the input is which way and how fast the player is walking. It is actually similar to input from a joystick on a gamepad, so it translates fairly well to most first-person experiences. The big difference is that you are physically walking, and it is usually accompanied by a VR headset, so it gives you full immersion into your experience. My first thought, which a lot of other developers have also thought for VR, was virtual tourism. I think it is a bit more compelling on the Omni than in seated VR because the Omni lets you walk around the virtual destination. I did try to set mine apart a bit by thinking about what we usually do when we travel - we take pictures. So I made a virtual tour of Amsterdam where the only interactions are walking and taking pictures, and those pictures (screenshots, in this case) are saved to your computer so you have them to keep when you return from your virtual tour. You can check it out here.

Now for a real treat: the Wii Fit Balance Board! 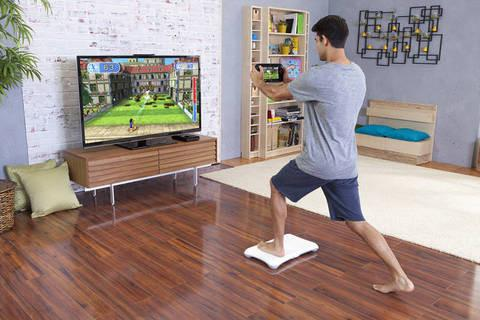 The Balance Board is a pressure sensor (or multiple pressure sensors?) that can very accurately tell which way you are leaning. When you first stand on the board it asks you to stand still (that's right, the board talks to you) while it calibrates to your weight. After that it can tell any direction you lean based on where you are putting pressure. If you pick up one foot and step forward or backward, it know which foot and if you stepped forward or backward with it (based on the foot still on the board placing more pressure on the toe or heel). I have tried unsuccessfully to trick it, it's a pretty smart board!

While in grad school I was assigned to a team working with the U.S. military to design a fitness game. Obviously a mouse and keyboard was not going to work for this, so we set out to try all of the hardware we could find that was used for fitness games. We experimented with phones, PS Moves, and devices that track biometric feedback, before settling on a bizarre combination - we decided to pair the Balance Board with a Kinect to track both shifting weight and also upper-body movement. Oh yeah, and we added in a heart rate monitor :D

Here's how the game worked - we used used two balance boards so that two players could control hover boards in the game by leaning to steer. With their arms they could reach out to collect things or punch to "fire" a projectile (a ball of plasma that would come rocketing out of your fist). We also strapped heart rate monitors onto the players, partly because we needed the data, but we also decided to add a gameplay element around them. When the players step onto the balance board we took an initial heart rate reading, then as the game progressed and a player's heart rate went up we would make that player's plasma balls bigger and more damaging. The game was cooperative, so the two players worked together to fight off giant robot spiders, but at the end we gave them a score that combined how many spiders they kills and how many items they picked up. A fascinating thing happened when we added the heart rate effect - it actually evened out the scores between players who were more fit and less fit. Since we were taking an initial reading and tracking increase, players who were already in good shape had to work harder to get the positive effect. We found through testing that this leveling of the playing field made the game more fun for everyone. Want to see a gameplay video? Of course you do.

I really want to tell you about the rest of the hardware, but this post is now fairly long and I need a break, so I will continue in part two! Also, this seems to have done the trick to beat my writer's block!